Yesterday I came across this post on Reddit in which a person shows that he has upgraded his laptop’s RAM to 128GB and its storage to 12TB! 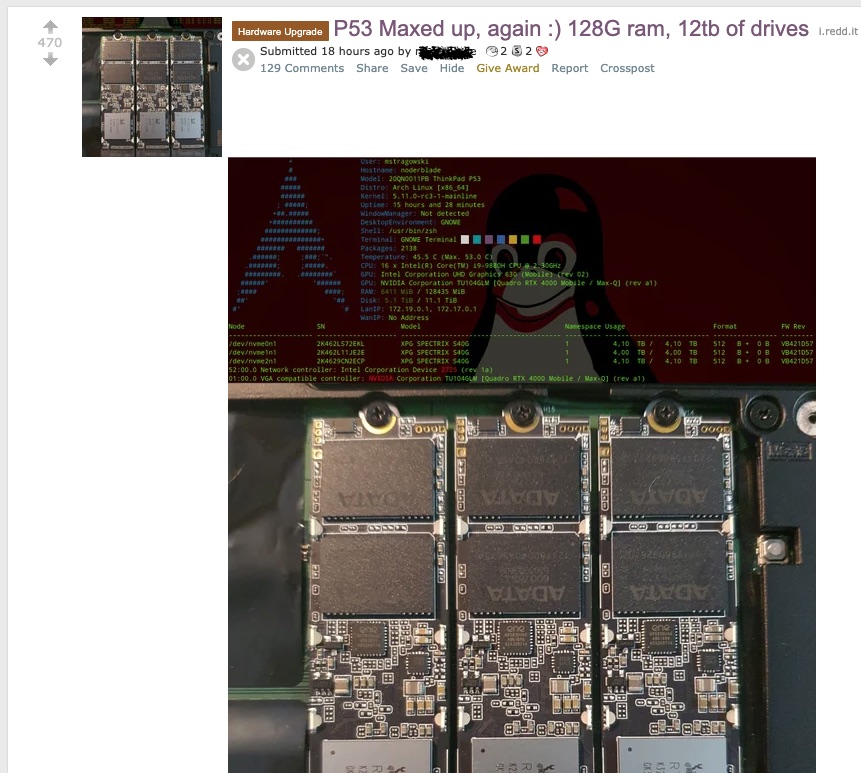 For the first 10 seconds after I watched this I said: Wow! This is a bold configuration. He probably can do whatever he wants with his laptop now! But after 30 seconds I said: What he can do with his laptop that I can’t with mine? After that, my brain started to use its power to convince me that there are certain areas, which I’m not aware of, that need a decent amount of resources. For example, maybe he’s a 3D animator who needs these resources to render heavy graphics. Or maybe he is a scientist that does a lot of complex computations. Anyway, I hope he has compelling reasons for this upgrade.

As an another example, a couple of weeks ago Samsung announced their new flagship phone Galaxy S21 Ultra. Believe it or not but this phone has 16GB of RAM, 5! cameras (one of them has a 108MP sensor), an octa-core processor (1x2.9 GHz Cortex-X1 & 3x2.80 GHz Cortex-A78 & 4x2.2 GHz Cortex-A55), and up to 512GB of storage! The funny part is that this phone has twice more resources than my current laptop I use for software development. My daily driver laptop has a Core i5 processor with 8GB of RAM and 256GB of storage. I use it almost every day and since I’m a software developer I do lots of resource-intensive tasks such as compilation and computation. I own this for about 4 years now can’t find a reason to upgrade it yet; however, the battery needs to be replaced which is normal.

In my opinion, the question we should ask ourselves before buying these stuff is that do we really need all of these? I personally do care about photos. I took lots of photos from my family and we love watching them every now and then. But my 12MP iPhone camera was always enough. We have even printed some of our best photos as well and the quality is satisfying.

Companies like Apple and Samsung are delighted to see people consume more even if they don’t use what they have purchased. They simply don’t care! All they want is your money! Even further, they want the society to believe that people who have the latest gadgets are more admirable; and unfortunately, they have succeeded!

The tragedy begins when you spend a considerable amount of money on a new device (The Galaxy S21 Ultra I mentioned above is around $1,400), let’s say a new phone, and after less than a week you face this unpleasant truth that it doesn’t make you happy anymore because the difference between your new gadget and the previous one is so slight you can’t even feel!

In November 2000, when Intel announced their first-generation Pentium 4 processors, most people instantly upgraded their PCs. You know why? Because the difference between previous generations and Pentium 4 was huge! Nowadays, your 2015 computer performance is almost as same as a 2020 model. You can feel it more obviously on smartphones these days. An iPhone 7 is capable of doing 80% of whatever you can do with an iPhone 12. Because the companies cannot provide life-changing features, they have started to limit older phones intentionally. Here are some very ridiculous examples:

And then to sell you even more they trap you in an infinite loop:

Examples I’ve mentioned above seem funny but I’m afraid they are the truth behind what some companies advertise.

What I’m going to emphasize here is that more than 80% (if not 90%) of people upgrade their devices not because they need to be upgraded but because they just want to have the latest ones. Some people even use them to show off! They think the more belongings they have, the more respect they get from society. I believe we should stop value humans by what they have; instead, we must value them by what they have done! I’ve seen plenty of engineers and scientists who are using very typical devices; but, they do extraordinary things with them. On the other hand, I see some other guys who own lots of high-end gadgets but they even don’t know how to use them! Computers that are used to send astronauts to space have specifications similar to the majority of smartphones made 10 years ago.

I’m not against new gadgets. A friend of mine bought an iPhone 12 a week ago after his iPhone 6 screen broke. He bought a new phone because he needed one and it’s totally OK! You don’t need 128GB of RAM on your computer to write a great book. You don’t need an iPad Pro to become a good doctor. You don’t need a high-end smartphone with 108MP camera to solve world’s most demanding problems. You don’t need the latest Apple Watch to win olympic games! All you need is you!